Preparing for Damages Caused by Wind

There are different types of wind, and the more damaging winds are commonly referred to as straight-line winds. This is aimed at differentiating the type of damages that they cause, from that caused by tornadoes or maybe even a hurricane. Jenkins Restorations offers exceptional services to the people who have been affected by wind storm damage.

There are several processes that cause the strong winds that cause damage to property from situations such as fallen trees. The main objective of Jenkins Restorations is to rebuild any property that has been subject to wind damage and restore the clients’ lives to normalcy. The Tips below will show you how to be prepared for damages caused by winds.

What Are Damaging Winds?

Any wind that is blowing at a speed that exceeds 50-60mph is classified as damaging wind. Typically it is more common to experience these winds from more frequent events such as severe thunderstorms than it is from a tornado.

What are Straight-Line Winds?

Straight-line winds are a type of wind that come from a thunderstorm, move horizontally along the ground and are not associated with tornadoes. These winds are common in the Midwest United States during the late spring and summer months, although they can take place anywhere.

How Bad are Straight-Line Winds?

In the lower 48 states in the US, Straight-line winds (damaging winds) account for 50% of the extreme damage reports. Damaging winds tend to be more common than tornadoes, and this causes more damage in most regions. Winds can blow at speeds that even exceed 100mps and this would cause damage that stretch for so many miles. With the services offered by Jenkins Restorations, it becomes easier to recollect your life and bounce back to the usual life that you are used to. Damaging winds cause a state of emergency, and you would need professional assistance immediately.

Straight-line winds are commonly produced by the overflow caused by thunderstorm downdraft. In most cases, the downdrafts spread in every direction from thunderstorms. When winds are being blown from different directions, it can cause serious damage to trees. As much as it is a natural hazard, the straight-line winds can be quite dangerous to anyone who lives in areas with wind susceptible trees.

What Are the Damages Caused by Wind?

Anyone who lives in any area that is prone to thunderstorms is highly likely to suffer from damaging winds. People who live in mobile homes are more vulnerable to risks, injuries and even possible deaths due to damaging winds. When the winds blow at a speed of 80mph or more, it becomes almost impossible for the mobile homes to withstand the risky hazard. 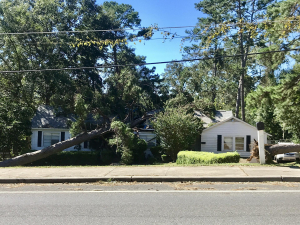 According to the national weather service a strong breeze begins at 25 MPH.

Winds 32-38 MPH: Hard to walk against the wind, full trees are in motion.

Winds 47-54 MPH: Damage begins to occur to buildings. Roofing tiles are at risk, you will tend to see broken branches on the ground.

Winds 64-75 MPH: Wind damage is widespread, with risk to large trees being blown over.

Winds over 75 MPH: Hurricane force winds, sever damage will occur. Damaging wind can harm roofs and windows. Trees will be uprooted along with risk of overturned small mobile homes.

Wind Damage to Your Home

A powerful wind can cause hazards to your property and surrounding areas- including fallen branches, uprooted trees and torn down power lines. While these dangers are what we picture after a big storm, the direct force of this destructive weather also results in structural damage to homes themselves!

Wind Damage to your Roof

What does your roof look like after wind damage from a storm? The first thing you need to know is the force of wind blowing over your roof won’t be uniform. There are certain areas that will be more susceptible than others, for example: corners and edges – with less stress felt by the center. If you notice one small corner sticking up, it could mean bigger problems from constant exposure to windy conditions on top of your home!

The roof of a home is the primary defense against wind damage. Even nicely constructed homes can sustain severe roof damages during storms, which could lead to roof leaks. Large tree limbs, fence posts and even whole trees are flying through the air at speeds that can break or tear roofs. You should check your roof for basic signs of wind damage after a storm.

With severe weather comes strong winds, thunderstorms and even hail. It is important to make sure buildings are assessed in advance of these storms and gauged for stability for your safety from wind storm damage. No matter the season, it never hurts to be aware of the damage that high winds can do to your home or business.

High winds, tornadoes, and hurricanes can make something as simple as a trashcan or child’s toy into an airborne missile!  When you hear of wind and storm warnings, make sure to bring in anything that could be picked up and blown into vulnerable areas of your home or business like windows or doors.  Outdoor buildings such as storage sheds should also be anchored properly to the ground.

Garage doors are particularly susceptible to wind damage.  High winds, tornadoes, and hurricanes can damage or blow them, creating a high pressure situation which can damage the roof as well.  Reinforce the door by using braces across the back or replace with a stronger door and tracks.  Modifications should be done by an installer.

3) Pay attention to your trees and landscaping

Trees can cause debris that can damage your home in a windstorm.  Maintain trees having them trimmed and debris raked and disposed of regularly to help minimize damage from a storm.’

Jenkins Restorations has a team of experts that have great experience in different types of damages. When you have suffered wind damage, the primary goal of Jenkins Restorations is to alleviate your stress levels and work hard to restore your life in a speedy manner. You can get emergency assistance any time of the day or night, and this will go a long way in helping you deal with your property damage, attributed to damaging winds.

What type of damage do tornado cause?

Tornado causes severe damage to homes, businesses, and vehicles. The wind speed of a tornado can reach up to 300 miles per hour. Tornadoes usually occur during thunderstorms, and they can be deadly.

Typically, wind damage is covered under standard homeowner’s insurance policies. However, if you live in a hurricane zone, you should consider purchasing additional coverage for wind damage.

What type of damage can a thunderstorm cause?

Mobile homes are designed to withstand strong storms and can handle winds up to 70 miles per hour. However, many models are able survive with speeds of more than 110 mph!

What wind speed is considered windy?

Wind can break windows when it hits them at high speeds. The force of the air hitting the window causes the glass to shatter. This happens when the wind speed exceeds the strength of the glass.

How fast do winds need to be for a tornado?

A wind speed of at least 74 mph is needed for a moderate tornado to form. According to the Fujita model, winds as low as 40 mph can form a gale tornado, which will only bring moderate damage.

What wind speed is dangerous?

When wind speeds reach 30-45 mph, it can become dangerous for driving conditions. Damaging high wind, with sustained speeds greater than 40mph, are a high threat to life and property.

What wind speed blows out windows?

Have You Recently Dealt With Wind Damage?

After a Storm, make sure to call Jenkins Restorations to get your property – and your life – back to normal again.

How to Tell If Your Roof Has Hail Damage

Scroll Up
Do You Know What to Do To Prepare For A Hurricane?

Get your FREE copy of our “Hurricane Survival and Preparedness” checklist to make sure you’re prepared in the event of an emergency.