How do Electrical Fires Start?

Electrical fires are unfortunately common in American homes. According to Electrical Safety Foundation International (ESFI), an estimated 51,000 residential fires involving electrical failure and malfunction occur each year. On an annual average, these destructive fires are responsible for 500 civilian deaths, 1,400 injuries, and $1.3 billion in damage to property. Knowing how to prevent electrical fires can save you a lot of money and help keep your home safe

Most electrical fires in homes are sparked off by incorrectly installed wiring (often DIY wiring), overloaded circuits, and misuse of extension cords. While it is always safer and more efficient to have any electrical work carried out by a certified electrical contractor, there are many things you can do at home to prevent fires. 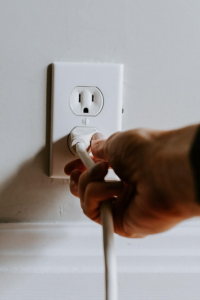 If you are attempting to set up a new appliance by yourself without help from a professional electrician, you should double-check all your connections. Be sure to refer to the instruction manual completely and thoroughly. Certain electrical appliances require a voltage regulator, and should not be plugged directly into any socket. You should make sure that you know these specific requirements ahead of time.

While using extension cords, you should also make sure that it is not cracked or broken. Older extension cords can begin to come apart, exposing wires. Exposed metal wires anywhere can lead to electrical fires. Be sure to discard all cords and plugs that are worn or frayed.

Not all light bulbs work with every fixture. Some fixtures may use incandescent bulbs while others use fluorescent bulbs. If you are unsure which type of bulb will fit where, consult the manufacturer’s instructions. To prevent an electrical fire, make sure that your light bulbs are used with electrical sockets that match their labeled wattage.

Another form of an electrical extension in the surge protector or power strip cords. Typically, these have six or more outlets in the device with one main cord that plugs into a wall outlet. These are helpful when you have a need for using multiple electronic devices in one common area such as a home office, kitchen or living room.

However, it is crucial to use caution at all times with these electrical outlets. Most importantly, never ever “piggy back” one power strip into another! This can easily start a fire, affect your circuit breakers, or worse, cause electric shock. As a leading cause of electrical house fires, it is always a good idea to safely plug your electrical cords in a spaced out power strip in order to prevent potential fire hazards.

Prongs on plugs are also important to recognize. To effectively update the safety of your outlets, try replacing two-pronged outlets with three-pronged outlets. This allows a stable, secure insert of your device and decreases likelihood of a device getting loose from the wall outlet. For everyone’s safety, never break off the third prong on a plug to plug it into a two-pronged outlet. This is extremely dangerous and creates more potential problems that may compromise the safety of you and your home.

How to Prevent Electrical Fires

Knowing what causes electrical fires in homes is the first step in prevention. Things such as knowing where to place your items, like portable heaters being placed in the center of a room and away from walls, curtains, beds, and other furniture. There are also other ways to prevent or minimize the risk of electrical fires, most of which are very simple and easy.

One way to reduce the chances of an electrical fire is to use only non-flammable materials around your house. If there’s something flammable near your stove, fireplace, hot water heater, dryer, etc., then this could cause a problem if they catch fire. Try to keep combustible objects at least four feet away from anything that might burn. Also, don’t leave candles burning unattended; put them out immediately after use. Keep children away from things that look like they’re about to explode. And always unplug unused electronics before going to bed so they won’t accidentally turn back on while sleeping.

Electrical fires are often caused by faulty wiring. Check your circuit breaker box regularly to ensure that no circuits are tripping frequently. Replace old switches and light fixtures whenever possible. Make sure that all lights are working properly and that bulbs aren’t burned out. Unused sockets should be covered with covers to protect against accidental contact.

Make sure you address complications related to electrical wiring as soon you find them to prevent an electrical fire. Time can take a toll even on the best electrical wiring, especially near lighting fixtures and light switches. So it’s important to get wiring checked 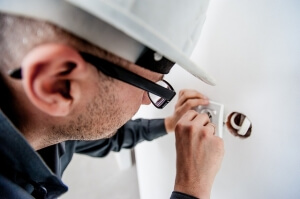 regularly. You can tell when a wiring system is defective by lights fluctuating or dimming.

In the United States, older homes built before 1970 are especially susceptible. It’s always a good idea to have a licensed electrician to check your home’s wiring and make any necessary repairs.

How to Stop an Electrical Fire

It is important to know how to put out an electrical fire, even if you don’t have a fire extinguisher. Preparing for the worst-case scenario and taking precautions such as system upgrades will help lower your risk of having one in any case!

The first step when fighting against fires starts by cutting off power at its source. Disconnecting the electricity to a source of fire is key in containing it. If you can’t get rid of that one appliance, unplugging will reduce your risk and allow more focus on shutting down other potential causes, like flammable materials near appliances or fuel sources with open flames. Once you’ve turned off the electricity, you’ve cut off the source of the fire and you are no longer at risk of electrocution.

A fire blanket will stifle all of its oxygen if you have one, putting out small flames even without water nearby. If there are no blankets around and you’re confident that power has been turned off already then you can use buckets of water or spray heads from sinks instead!

Another option is to use baking soda. If the fire originated from an appliance or an overloaded cord, you can toss baking soda over the flames once the power source has been unplugged. The baking soda contains sodium bicarbonate, which is a Class C fire extinguisher. Mr. Electric recommends keeping an open box of baking soda easily accessible in your kitchen.

It is important to know how to put out an electrical fire so you can prevent the fire from getting to large. If the fire gets too large, it becomes much harder to control. In some cases, electrical fires require professional assistance, and firefighters must enter through windows or doors. They’ll probably need to evacuate people and pets from nearby rooms.

Once the flames die down, open up vents and let air circulate inside the building. Open windows and doors to get fresh air flowing throughout the space. Then, close those openings again once everything seems safe. Finally, remove wet clothing and shoes to avoid spreading moisture onto carpets and floors.

By keeping the above-mentioned things in mind, you can prevent electrical fires in your home and steer clear of property damage and potential loss of life and remember, always have a smoke alarm installed for your safety.

Why are Electrical Fires Especially Hazardous?

Electrical fires are especially hazardous due to the fast spread of flames and the fact that many materials within homes are highly combustible. In addition, traditional firefighting techniques such as smothering or dousing with water can increase dangers posed by an electrical fire as both could lead to electrocution of those fighting the fire or cause it to spread even more quickly.

The key factor in successfully managing and eliminating an electrical fire is to identify its source and cut off power as soon as possible while continuing to avoid contact with electrified elements through the use of protective equipment. Taking immediate action can help minimize the risk presented by an electrical fire and make structure involvement or fatalities less likely.

Can water cause an electrical fire?

Yes, water can be dangerous for electrical equipment, especially when it comes into contact with electricity. If you find yourself near a pool, lake, river, or ocean, keep away from any electrical equipment. Avoid using power tools near water sources, and never use a generator near water.

An electrical fire looks like a bright light coming from the ceiling. The fire may be small at first, but it grows quickly.

What type of fire is an electrical fire?

What type of fire extinguisher is used for electrical fires?

Electrical fires are often extinguished using CO2 extinguishers which are commonly on Class B fires.

Can static electricity cause a fire?

Static electricity under certain circumstances can create a spark that starts a fire.

Can you use a fire blanket on an electric fire?

Yes, you can use a fire blanket on a fire caused by an electrical short circuit.

How long can an electrical fire smolder?

An electrical fire can smolder from several hours to a day or more, depending on the circumstances.

What is the most common cause of electrical fires?

The most common cause of an electrical fire is typically faulty electrical outlets or old, outdate appliances. These can cause faults in cords, receptacles, and switches.

Can water put out electrical fire?

When experiencing an electrical fire, you should never throw water on it, because water conduct electricity and it could cause you to be electrocuted.

Do You Need Help Cleaning Up After An Electrical Fire?

Here’s What to Do If Your Pipe Bursts

Preventing Dryer Fires in Your Home

Scroll Up
Fire Damage Can Devastate Your Family

But It Doesn’t Have To

Get your FREE copy of our “What to Do After A Fire” checklist to make sure you’re prepared in the event of an emergency.